Here are just a few ideas for your daily itinerary while staying in Argyll. There's so much to see directly from our doorstep, so be sure to check out our accommodation and book your stay!

There are many castles in this area of Argyll, some ruined and some restored and occupied, but almost all have stories of ghosts...a great adventure for both wee & ‘big’ kids of all ages! We've listed a few that are nearby us, along with some other historic sites of interest.

Though a ruin today, it was well defended and features a parapet walk, corbelled angle turrets, gun-loops, and pistol holes around the building.  The masonry matches the design, shown in the carved string-courses and rainwater spouts.  The Earl of Argyll granted the lands of Carnasserie to his ‘familiar servant’ Master John Carswell, rector of Kilmartin, in 1559.

Carnasserie was captured and partly blown up by Royalist forces during Argyll’s rebellion against James VII in 1685.  Although it was still regarded as one of the finest houses in Argyll, no attempt was made to renovate or repair the castle.

From the parapets there’s a magnificent view down to Kilmartin Glen, which is home to a range of rock carvings, cairns and standing stones (which we'll share more about later), some of which are visible from the tower.

The Kilmartin Stones (10 miles north of the Hostel)

A collection of 79 ancient graveslabs at Kilmartin parish church in the village of Kilmartin.  The earliest stones date back to the thirteenth or fourteenth centuries, with the most recent ones dated 1707 and 1712.

Kilmartin castle can also be found here. Once ruined, it has been restored lovingly and is now a private home and B&B. See if you can spot it hiding behind the trees as you look up from the auto-repairs garage.

We thoroughly recommend a visit to Kilmartin Museum while in the village, where you'll learn all about the ancient history before exploring the rest of the glen...
‍

Kilmartin Glen is located between Oban and Lochgilphead, surrounding the village of Kilmartin.

The area spans 5,000 years with a multitude of cairns, standing stones, carved rock, stone circles, forts and castles.  Kilmartin Glen is considered to have one of the most important concentrations of Neolithic and Bronze Age remains in Scotland.

There are more than 350 ancient monuments within a six mile radius of the village, with 150 of them being prehistoric.

Monuments include standing stones, a henge monument, numerous cists, and a ‘linear cemetery’ comprising five burial cairns.  Several of these, as well as many natural rocks, are decorated with cup and ring marks. Burial cist...do you dare crawl through? Standing Stones...Go on, touch them!

The rock carvings at Achnabreck are among the largest and most complex motifs in Scotland.  Some of the circular hollows, or cup marks, are surrounded by up to 12 rings, more than a metre wide.  The cup and ring marks are by far the most common motif, though other decorations can be seen, including: multiple rings, ringed stars, parallel grooves & spirals.

The spirals are of particular interest, as they are similar to examples found in Ireland and suggest wide-reaching contacts.  Some of the carvings appear to overlie others, and there are several different styles and motifs used.  This suggests that the carvings at Achnabreck accumulated over a long period.

We can only speculate what meanings Kilmartin Glen’s prehistoric inhabitants attached to these markings.  Apart from the occasional axe, the art is mostly abstract – there are no animal or human figures.

A rich prehistoric landscape survives in Kilmartin Glen, providing a tantalising insight into its prehistoric population.  The surviving rock art along the glen is remarkable for the number of elaborately carved outcrops, the style of and extent of the carvings, and their close association with other prehistoric monuments.  No other place in Scotland has such a concentration of prehistoric carved stone surfaces, and Neolithic and Bronze Age monuments.

The remains of the fortress of the Scots at Dunadd, a royal centre of Dal Riata, are located to the south of the glen, on the edge of the Moine Mhòr or Great Moss.  Excavations in the 1980s found the mound was used as a fort more than 2,000 years ago.  But the site is internationally renowned as a royal power centre of the Gaelic kings of Dál Riata, from about AD 500 to AD 800.

The region's historical hotspots extend beyond Kilmartin Glen too...

This once ruined castle has also been re-stored and is now a private home & B&B. You can spot it across the water from Crinan, which is very pretty and worthwhile coffee stop on any castle trail!

Castle Sween is thought to be the oldest castle on the Scottish mainland that we can date with any certainty.  Architectural details show it was built in the 1100s and occupied for about 500 years.  The castle sits on a low ridge looking over Loch Sween and out to Jura.  To its west is a small islet cleared to act as a boat landing, illustrating the vital importance of the sea as a major transport link.

From the B8024, turn right for Achahoish and follow the road 4 miles to reach St Columba’s cave.  West of the village, near Lochhead farm, there’s an old burial enclosure and above it Caisteal Tor, where the Dun or fortress of King Conall of Dalriada was located.  He was Columba’s cousin and tradition has it that Columba came here seeking Conall’s help.  So the exile was directed towards Iona.  In commemoration of this, further round the loch, is St Columba’s Cave screened by a ruined 13th century chapel.  The cave is undoubtedly an ancient place of sanctity testifying to the Columba tradition, and pilgrim offerings are left on the altar shelf.

Famed for Robert the Bruce, who completely re-built and extended the medieval castle, Tarbert Castle sits ruined atop the pretty fishing village. Excellent interpretation boards and information help you envision how it once was, and there are some lovely walking routes around it. Not to mention the numerous opportunities for food, coffee, and souvenirs in the village below.

Skipness Castle is also free to visit.  The castle and chapel are open year-round.  The Castle dates to the early 1200s and was probably built by either Clan MacSween founder Suibhne (Sven) ‘the Red’, or his son, Dugald.

Rebuilt several times over three different centuries, it offers a snapshot of the variation in form of Scottish castle architecture between the 1200s and 1500s.

The castle consisted of a modest two-storey hall-house and chapel, dedicated to St Columba.  Skipness was the MacSweens’ secondary residence. Their chief seat was at Castle Sween, which was built before 1200 and is today one of the oldest stone castles in Scotland. They also built the hall-house castle at Lochranza on the Isle of Arran, as Skipness and Lochranza flanked the Kilbrannan Sound, protecting MacSween interests.

While you’re here why not visit the Seafood Cabin and eat some scrumptious lunch overlooking Arran. Look out for resident deer, CoCo, as well!

We’ve offered the above as an overview of some of our favourites but you will also find more information here.‍

We would recommend at least a minimum 2 night stay to enable you to enjoy any of the above...this gives you time to settle in, and plan your day trips.  The longer your stay, obviously the more and varied your holiday will be.

We will supply all our usual Hostel facilities, with all beds made up ready for your arrival, so all you need to bring with you are personal towels, clothes, all food & drink and any bikes/kayaks etc you wish to bring along.

Click here to check availability and get booked in! 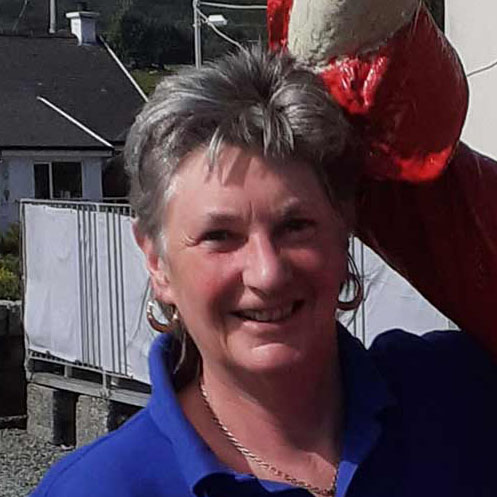 Tall Tales & Stories
Historic Standing Stones, Castles & Culture... and some stories of blood & guts!
Castles and History in and Around Argyll

Outdoor Adventures
Go Wild: Cycling in Argyll
Amazing cycling routes on our doorstep, in and around MId-Argyll & Kintyre.

Kate
Tall Tales & Stories
Historic Standing Stones, Castles & Culture... and some stories of blood & guts!
Castles and History in and Around Argyll

Pam
Around Argyll
Walking in the Heart of Argyll: The long & the short of it!
Exploring beautiful Argyll on foot: a few of our favourite walks and sights to see along the way.

Pam
News & Events
Surviving Lockdown: The hostel story, so far!
Our story of getting through the pandemic.